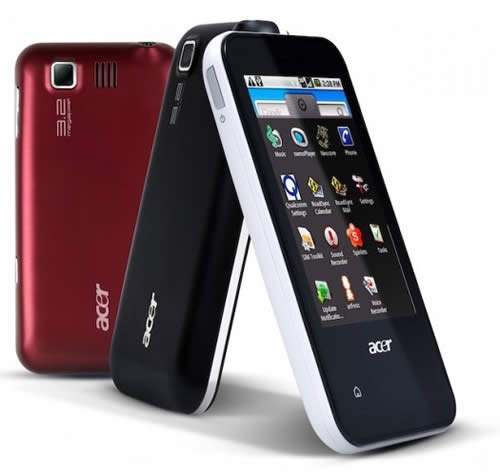 The first new smartphone is the Acer beTouch E400 (pictured above), which is a premium smartphone running on Android 2.1.

The Acer beTouch E400 has a 3.2 inch touch-screen, which is large enough for all your multi-media, internet and office needs. It has a 3.2 mega-pixel camera with flash, geo-tagging, digital zoom and also doubles as a video recorder.

The E400 also has “Acer Lighting Behaviour”, which has smart LEDs that alert you if you’ve received a new message, missed a class or your battery is low. One can only assume this is for when you require your mobile on silent, such as in business meetings. Native Microsoft Exchange server support will please all the business users as it enables you to access your corporate email wherever you are.

The beTouch E400 will be available in the UK from April.

The second mobile announced is the Acer beTouch E100, which is more of a budget smartphone and runs on the older Android 1.5 operating system.

It has a 2.8 inch touch-screen, a 3 megapixel camera and an FM radio.

The Acer beTouch E100 will launch in the UK in March.