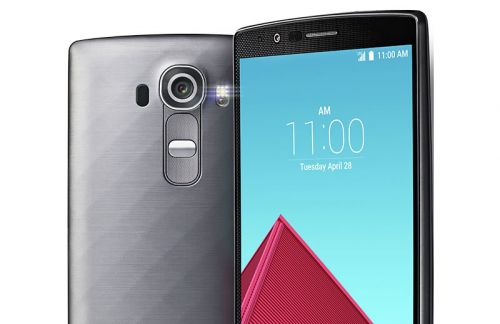 "The LG G4 is a strong flagship which delivers in the key areas, but there are a few niggles which hold it back from true greatness."

With Samsung delivering its best phone in years LG really had its work cut out to make a mark with the G4, but with a top flight camera, big screen improvements and a bigger battery than most of the competition it’s certainly off to a good start.

So do all the parts of the LG G4 come together to create a convincing whole, or are you better off spending your £500 elsewhere? Read on to find out.

Seemingly realising that it couldn’t trundle out yet another plastic flagship LG went back to the drawing board with the G4. Or kind of anyway, the overall look of the phone is very similar to the LG G3, but this time it’s offered with a leather back. 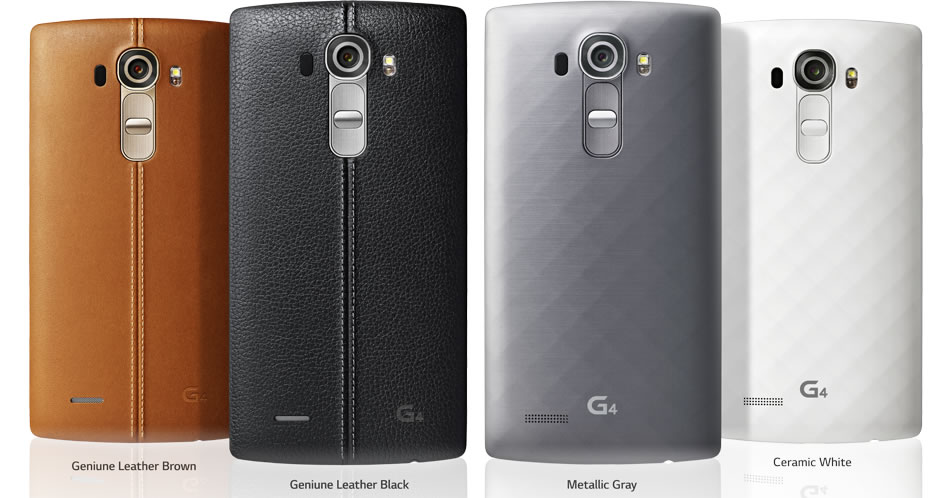 That provides a soft texture that’s comfortable to hold and it undeniably looks good compared to plastic. It also has the advantage of standing out from the new wave of metal and glass backed phones.

But leather aside the LG G4 has a fairly conservative design, which doesn’t stray far from what LG’s done before. It’s ever so slightly curved at the back and has those rear keys which are as divisive as ever. For our money they’re pretty good, but hardly game-changing and they take some getting used to.

LG is also offering buyers a choice of designs when they buy the G4. That should be a good thing, but when all the non-leather options are plastic it’s not a particularly inspiring selection.

The real problem with the LG G4’s design though is just how big it is. At 148.9 x 76.1 x 9.8mm you feel a bit like a mountain climber trying to grip it or use it with one hand. The size seems unnecessary too, given that the LG G3 has the same size screen yet manages to be smaller.

The LG G4 has a 5.5-inch 1440 x 2560 display and it’s one of the best things about the phone. With a pixel density of 538 pixels per inch it’s incredibly sharp and while the size might be a little large for many would be buyers it’s certainly great for enjoying videos on.

But there’s more here than just size and resolution. LG has also worked hard to deliver the most natural looking colours possible. The upshot is that though it’s not as vibrant as the Samsung Galaxy S6 say the images displayed on it look closer to real life. 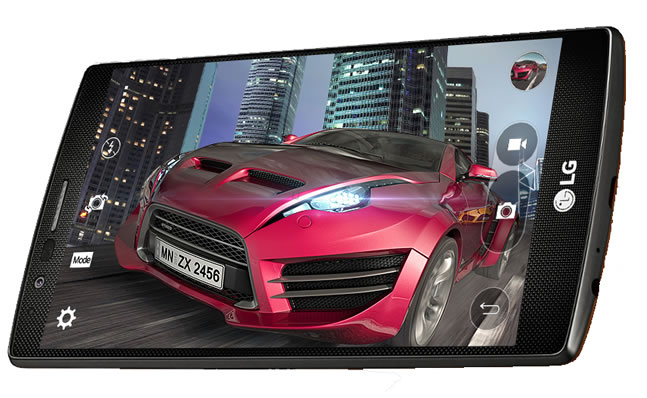 Now whether that’s better than larger than life colours is subjective really, but it certainly looks good. It’s not quite as bright as Samsung’s screens either and it loses a noticeable amount of its brightness when viewed at an angle, but viewed straight on it’s a joy to use.

So why the 808? Well if you believe LG it’s because the chip has been optimised for the G4 to offer similar performance with less of a battery drain. There might be some truth to that but ultimately when it comes to raw power the 808 can’t match up to the 810 and that shows in use, albeit only slightly.

For general operation it’s perfectly smooth but put it to the test in some demanding games and performance isn’t quite up to the standards of its rivals.

There is at least 3GB of RAM under the hood, so it’s not lacking there and the LG G4 is still a very powerful phone, it’s just not quite the most powerful.

LG has really talked up the camera on the G4 so it’s got a lot to live up to. Thankfully it doesn’t disappoint in the slightest. Its 16 megapixel sensor can take detailed photos, helped by an f/1.8 aperture which allows it to take far more light in than most rivals, for great shots even in low light.

Add in optical image stabilisation 2.0 to keep the lens steady, a laser autofocus to focus faster than you can think and a deep manual mode with various settings you can tweak such as the ISO, white balance, shutter speed and exposure compensation and it’s a real winner. 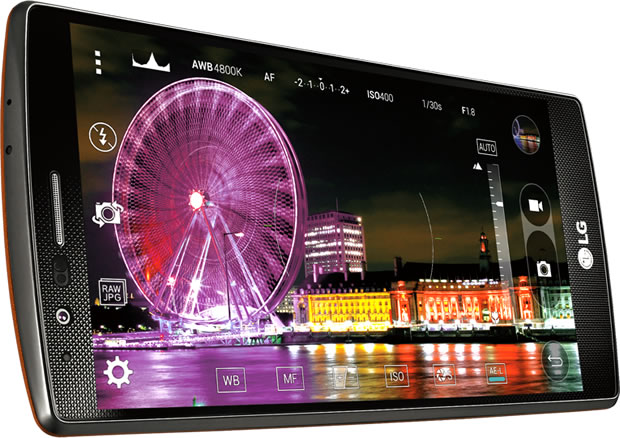 If you’re more the point and shoot type this is still the camera for you though, as its auto modes snap a mean picture and for the most part it replicates colours more naturally than we’ve seen elsewhere on smartphones too.

Things are only slightly less impressive round the front, with an 8 megapixel camera on selfie duties. That’s more than enough to take a group photo, and with gesture controls and the ability to have it snap four shots in quick succession you should easily be able to get one you like.

You’ll never have to miss a moment either as the camera can be launched with a double tap of the rear key, even if the screen is off and if you like to edit your photos you’ll appreciate the ability to save them in RAW format.

Even video impresses, with the G4 capable of shooting in crisp 2160p at 30fps. All in all this is just about the best camera phone around, rivalled only by the Samsung Galaxy S6.

LG has baked in quite a few features to its interface, aimed at making life easier. There’s Event Pocket for example, which lets you drag and drop entries from various calendars into one new unified one and Smart Notice which will give you personalised information and recommendations based on the weather, traffic and your daily routine. 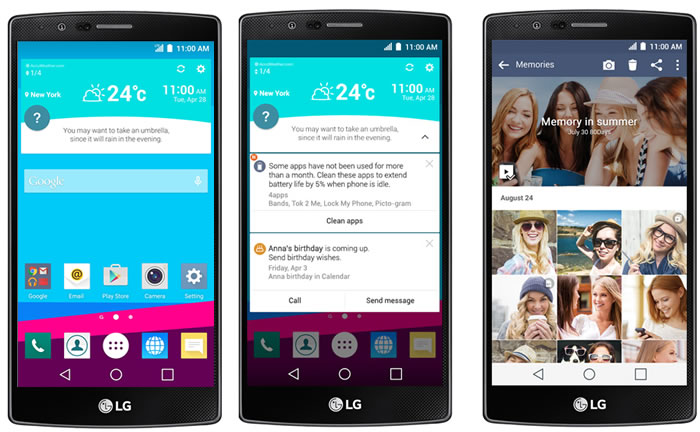 They’re solid features, but they’re ones which many users may have no interest in and we can’t help but feel that a more stripped back interface would have been simpler and more engaging.

It’s inherited at least one feature from the LG G3 that’s a real winner though, specifically Knock Code, which lets you not only turn the screen on with a tap, but also unlock the phone with a series of taps.

Underneath all LG’s additions there’s Android 5.1 running the show, so you’ve got the best of Google there too.

The LG G4 has a 3000 mAh battery, which while not huge is bigger than the Samsung Galaxy S6 or HTC One M9 offers. It translates into better battery life too, with the phone easily lasting a day with moderate use and potentially stretching part way into a second if you’re more frugal in your use.

That’s not as good as we’d like but it’s a step up from its closest competition, so it’s a victory in that sense.

For memory you get 32GB of storage built in along with a microSD card slot which supports cards of up to 128GB. There’s a full suite of connectivity options, including Wi-Fi, 3G, 4G, Bluetooth 4.1, NFC and infrared.

The LG G4 has a lot going for it, from one of the best cameras we’ve seen on a smartphone to a top flight screen. But while those two things are big wins it doesn’t impress as much elsewhere. The design is a mixed bag, battery life tops the competition but still isn’t brilliant and it feels a little underpowered. It also lacks some of the features we’ve come to expect from flagship phones.

There’s no fingerprint scanner and no fast charging for example. They’re small features perhaps but they make a difference. If you buy the LG G4 you’re unlikely to be disappointed with it, but while it’s a very good phone it’s not quite a great one.