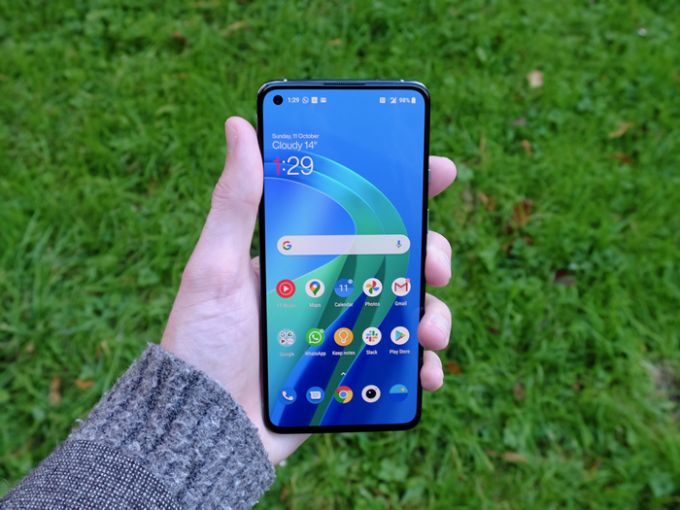 The OnePlus 8T makes only incremental improvements over the OnePlus 8, but it remains a highly compelling upper-mid-range 5G pick - especially at its new lower price. We particularly appreciate having the Pro’s 120Hz display technology at a more accessible price point, while the new 65W charging system will be a revelation for power users.

After testing the lower-mid-range waters with the OnePlus Nord, the Chinese brand is back in familiar territory with the OnePlus 8T. Here is another highly capable flagship-level phone at a decidedly less-than-flagship price.

Aside from the tricky task of replacing the excellent OnePlus 8, the OnePlus 8T has to bear the burden of being the only flagship phone from the brand rolled out in late 2020. There will be no OnePlus 8T Pro, with the OnePlus 8 Pro set to stick around for a full 12 month term.

The OnePlus 8T, then, has to provide a meaningful update on its predecessor without outshining its elder statesman brother. There really isn’t much room to manoeuvre here, but OnePlus has been smart and largely successful with its modifications. 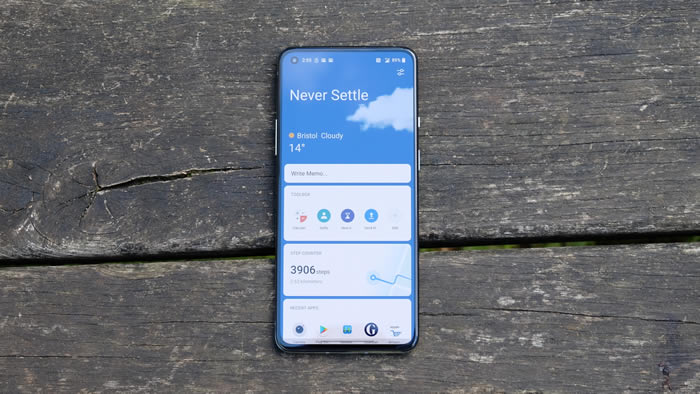 Its 6.55-inch AMOLED screen sports identical dimensions to the OnePlus 8’s, and the same pixel count too at 1080 x 2400. There’s been no attempt to nudge closer to the Pro’s epic 6.78-inch QHD display on either front, which leaves the latter as the undisputed king of the 2020 range.

Sitting the OnePlus 8T side by side with the OnePlus 8, we honestly couldn’t call a winner in terms of sheer image quality. Start scrolling through content, however, and you’ll note that the 8T has adopted the Pro’s silky 120Hz refresh rate.

At 90Hz, the OnePlus 8 felt plenty smooth enough, but web content and menus flow past even more fluidly on the 8T. It’s a tangible, if not quite game-changing, improvement. 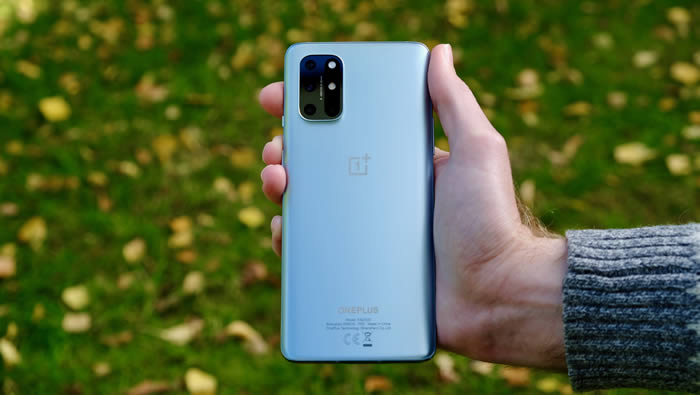 You might expect the OnePlus 8T to sport the same basic design as the OnePlus 8, but the two phones are more different than they initially seem. The 8T is slightly taller, wider and thicker than the OnePlus 8, and it’s also a tad heavier.

Though we’re talking fractions of millimetres here, and just 8 grams in extra weight, the combined effect is noticeable when you hold the two together. The OnePlus 8T is a heftier bit of kit.

That feeling is carried through to the 8T’s looks. Where the OnePlus 8 screen curves off slightly at the edges, the 8T has gone with a dead flat front. It looks and feels a little less ‘premium’ as a result - something that’s exacerbated by a fairly thick plastic halo between display and aluminium frame.

With that said, we find the 8T’s flat screen approach preferable when it comes to displaying content, especially landscape videos. There are none of the light distortions that you get with the 8 (however slight) and 8 Pro, and you won’t get any false inputs with your holding fingers either.

Flip the 8T over and you get a similar matte-effect to the Gorilla Glass rear panel that we saw in the 8 and the 8 Pro. It curves away at the edges in a similar fashion too, ensuring that it feels really good in the hand.

The most notable difference with the 8T’s rear section comes from the movement of its camera module, which is now squarer and fatter, to a more traditional position in the top left corner. According to OnePlus, this was done as part of the 8T’s improved thermal set-up, and to improve its antenna performance.

So far we’ve been talking about subtle tweaks and improvements from the OnePlus 8T. But if there’s one area where things have stayed more or less exactly the same, it’s performance.

The OnePlus 7T packed a faster processor than its immediate predecessors, but the 8T runs on exactly the same Snapdragon 865 CPU as both the 8 and the Pro.

In practical terms, we’re not too bothered that OnePlus has eschewed the Snapdragon 865 Plus. The plain 865 remains a highly capable chip, with the kind of performance headroom that few will fully exploit over the next several years.

It’s unquestionably an area of potential differentiation that’s been removed, however. Part of that decision was doubtless intended to maintain the OnePlus 8 Pro’s position at the top of the table.

The status quo has also been maintained through the use of the same LPDDR4X RAM as the OnePlus 8, rather than the faster LPDDR5X of the Pro. Again, this isn’t a problem in real world performance - the 8GB or 12GB of RAM found in the 8T is ample, and everything from 3D games to multitasking flew on our 8GB model.

Talking of games, it’s here where the OnePlus 8T might have a slight leg up on its immediate predecessor. A new vapour chamber cooling system, which OnePlus says is around 200% bigger than before, ensures that the system runs cooler under sustained load. This should enable the CPU to run flat out for longer.

Where the OnePlus 8T’s performance really shines is when you put it up against the likes of the Pixel 5, which goes with the significantly slower Snapdragon 765 CPU at a higher (£599) price. While the OnePlus 8T offers precious little new in the performance stakes, it manages to look fast simply by standing still. 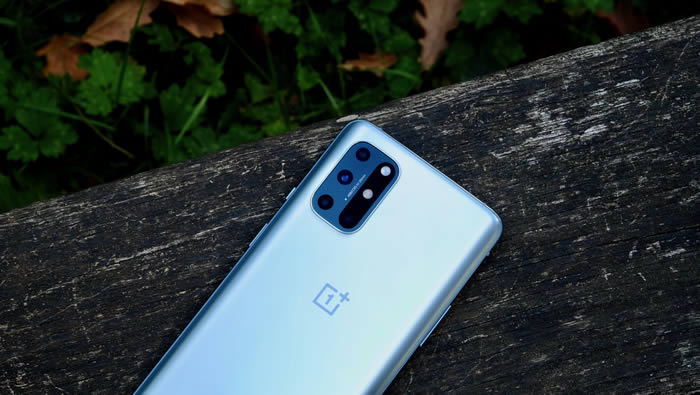 OnePlus talks of a ‘reworked’ and ‘refreshed’ camera module in the OnePlus 8T’s press materials. Which is PR speak for a largely familiar shooting experience, with one or two twists.

At the heart it all is the same main 48-megapixel Sony IMX586 image sensor that we saw in the OnePlus 8. The 16-megapixel ultrawide is also similar, though it actually sports a wider 123-degree field of view this time around, so you can fit more into the frame.

There’s a sharper 5-megapixel macro camera in the 8T which, while still not particularly useful, at least justifies its existence a little better. While we’re talking of superfluous camera tech, the 8T adds a 2-megapixel monochrome camera to the mix to help out with richer black and white shots. We’d rather have the dedicated telephoto lens of the OnePlus 7T for better zoomed shots, all things said.

With such minor tweaks, you shouldn’t expect anything approaching the OnePlus 8 Pro’s majestic camera performance from the 8T. However, we did note that the OnePlus 8T’s shots were generally a little brighter and more vibrant than those of the OnePlus 8. This is generally a positive switch, though it resulted in the odd brightly coloured shot (such as a bright pink flower) looking a little more garish than we’d like. 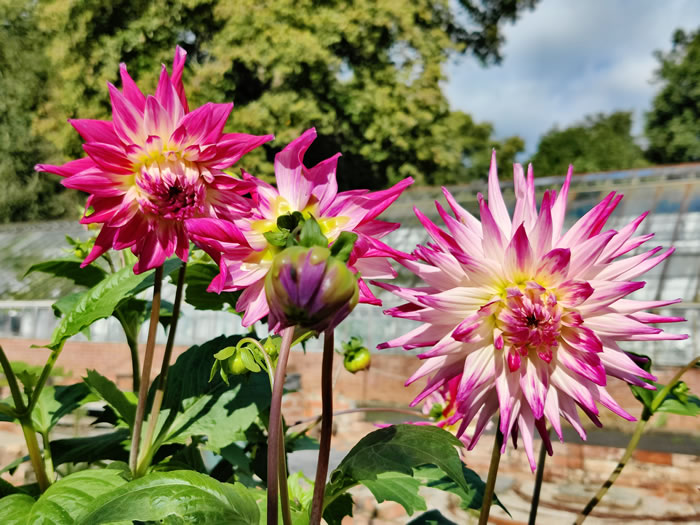 Presumably this shift is more of a case of refined algorithms than refined hardware, so we may well see similar adjustments coming to the OnePlus 8. Generally speaking, though, you’re going to be looking at a similar level of results to what we had before. Which means that the 8T falls well short of the top camera performers on the market.

It does a decent job in good lighting, though. You also get an improved Nightscape mode here, which brightens up very low light shots to a slightly smarter degree than before. Though again, it’s nothing that approaches the best phone cameras on the market, or the 8 Pro for that matter. 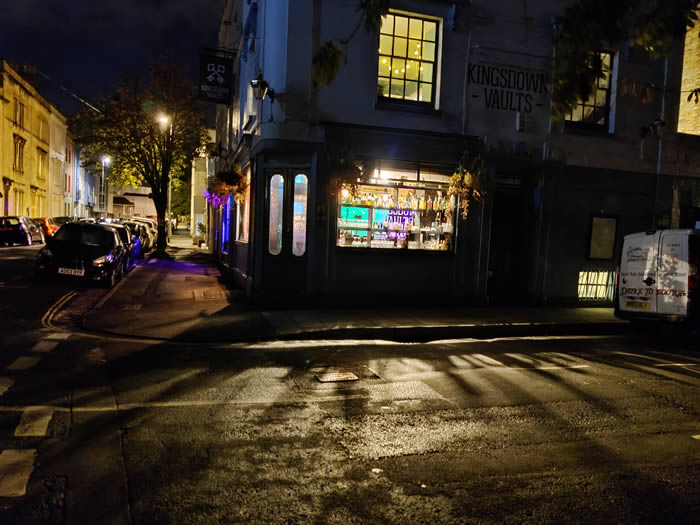 The OnePlus 8T is largely a refinement of the OnePlus 8. It hasn’t added the wireless charging that was lacking in the OnePlus 8, and there’s nothing so showy as the OnePlus 7T Pro’s pop-up selfie camera.

You still get a fairly speedy in-display fingerprint sensor stashed underneath the display, as well as stereo speakers. And it’s worth mentioning again the signature OnePlus alert slider, which lets you switch between silent, vibrate, and loud settings in an instant.

The 8T sees both the OnePlus and non-Pixel debut of Android 11, which is paired with a distinctive refresh of the OxygenOS UI. OnePlus has rethought its approach with a more stylised look, featuring bold and dynamic fonts, and a focus on easy single-handed usage.

This focus on making things reachable results in some slightly odd-looking elements. The Settings menu and the Gallery app, for example, sport large areas of blank space at the top of the screen until you start scrolling down. While this makes the 8T easier to use one-handed in certain instances, you still need to bring your other hand into play for things like dragging the notification menu down, so it’s not fundamentally transformative.

Elsewhere, OnePlus has finally implemented an Always On Display mode which, when activated, gives you dim time and notification icons even when the 8T is asleep. The new Insight Clock option gives you a stylishly abstract indication of how many times you’ve picked up your phone here.

In general, OnePlus’s software continues to be among the sharpest, smoothest, and least plagued by bloatware in the Android world. It’s an intuitive pleasure to use.

OnePlus has expanded the size of the OnePlus 8T’s battery to 4500mAh compared to the 4300mAh OnePlus 8. But of course, those gains are at least partially offset by the inclusion of a 120Hz display.

As a result, we found the 8T’s stamina to be in the same ballpark as the phone it replaces. That’s just fine by us, as it means we were getting through a full day of usage with around 30 to 40 percent left in the tank, depending on how intensively we’d been using the phone. This was with the aforementioned Alway On Display switched on as well, which would have sapped some extra power.

There has been a dramatic improvement in terms of charging speeds, however. In fact, OnePlus’s new 65W charging standard fundamentally changed the way we approached using the 8T.

Rather than leaving the phone on charge overnight, as usual, we would simply plug it in while we were making coffee and getting ready in the morning. The 8T would reliably get from around 27% to 100% in just 30 minutes.

The rest of the 8T’s specifications are broadly the same as the OnePlus 8’s. You still have a choice of 128GB or 256GB of storage, which is ample, and there still isn’t a microSD slot.

On the connectivity front you get 5G support, which is no longer the stand-out feature it was earlier in the year. We expect 5G speeds from all out pricier phones now.

The OnePlus 8T offers a broadly similar package to the OnePlus 8, but with a couple of welcome enhancements and a lower price. The phone’s 120Hz display is a welcome luxury, while its rapid 65W charging could change the way you use your phone.

There’s been no significant bump to the OnePlus 8’s performance or camera credentials, however, and it’s debatable whether these incremental improvements necessitated a whole new phone. But now that it’s here, the OnePlus 8T comfortably slips into the 8’s place as one of the best sub-£600 5G phones you can buy.