How to improve Three signal

Mobile phone signal is getting better all the time and these days most UK residents can generally get a 4G or at the very least a 3G signal where they live, but there are still some who can’t or who don’t get very good signal.

That makes sense, as signal doesn’t always penetrate buildings as well as it flows outside and if you live somewhere rural you might also be a long way from a mast.

But if you’re having Three signal problems there are ways to boost your signal at home and even in some cases when away from home.

The main way to improve your Three signal is by using the company’s Wi-Fi Calling service which is totally free and available on a range of handsets.

This lets you send and receive calls and texts over Wi-Fi, so as long as there’s a Wi-Fi network (which there likely will be if you’re at home, work or a number of public places) your phone will be fully functional.

This works without an app, using your normal dialler and SMS service, so it’s completely seamless.

It works automatically on Android, or on iOS devices running iOS 11.2 or later.

If you’re running an older version of iOS you can enable Wi-Fi Calling by going Settings > Data (or Phone) > WiFi Calling, and switching it on. However, you need to at least be on iOS 10.2 for Wi-Fi Calling on Three to work. You’ll also need an iPhone 5S or above.

For Android you need one of the handsets on this page. That includes the majority of mainstream Android phones, including but not limited to the Samsung Galaxy S10, S10 Plus, Galaxy Note 9, Huawei P20 Pro, Huawei Mate 20 Pro, Honor 10, Honor 10 Lite, Google Pixel 3, Pixel 3 XL, and Sony Xperia XZ2. Your phone also need to be running the latest software.

If you don’t have a compatible handset then you won’t be able to use Wi-Fi Calling on Three – though more handsets are sure to be made compatible over time.

Three used to offer an app-based service that did the same thing and worked with more phones. This was called Three inTouch. However, it has been discontinued. If Wi-Fi Calling doesn’t work for you, Three suggests calling 333 from your Three phone to discuss your options. 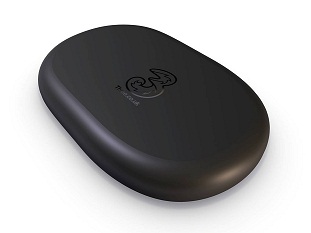 If you have Three signal problems at home there used to be an easy way to boost it, beyond using Wi-Fi Calling. It’s called Home Signal and it’s not something that you can get any more, but if you have it already or just want to know what it was, the details are below.

Three Home Signal is a box which you could request, it was available free of charge to those with bad signal at home or work, however, although there's no Three Home Signal cost you may have to return it if you cancel your Three contract.

Three Home Signal is basically a little black box, which you connect both to a power supply and to your router. Once it’s plugged in you’ll have to wait for it to connect, during which time you’ll see a flashing green light. This tends to take around ten minutes but can take up to an hour as it needs to both download the latest software and connect to the Three network.

You’ll know once it’s connected as it will start showing a constant green light. After that it’s ready to use and will act as a Three signal booster when at home, just as long as your router is on too. There isn’t any extra software or app required on your phone, you simply text and call as usual, but should notice a substantially better signal.

Three Home Signal will initially only be configured to work with your phone, but if you want other people to be able to benefit too then you can add up to 32 additional numbers to it and up to four people can make use of it at once, though obviously only people on the Three network can benefit.

Three Home Signal works over a range of up to 15 metres and typically uses around 500MB of data (from your home broadband) each month.

If you don’t want to rely on a Wi-Fi network there are other things you can try. For one thing simply charging your battery can improve your signal, especially if you don’t currently have much battery left.

If there are signal issues where before things were fine it could also be worth using Three’s network status checker to see whether there are any disruptions in your area.

If there aren’t it could be your phone that’s at fault, in which case first make sure your device is running the latest available software. If it is, try turning airplane mode on then off again and if that doesn’t work turn your handset off, wait ten seconds and then switch it on again. They’re simple solutions but they sometimes help.

The information contained on this website has been written to assist our readers. We do not represent Three or speak on its behalf and are entirely independent of Three.

How to unlock a Three phone or tablet

How to get Three 4G on your phone or tablet