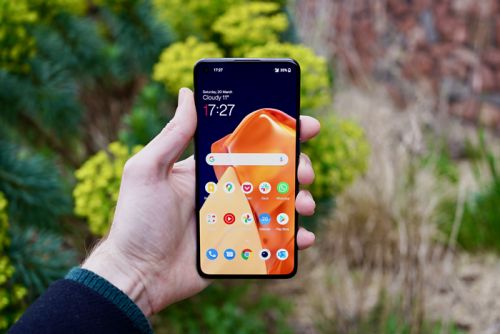 OnePlus has shuffled its priorities a little with the OnePlus 9, giving with one hand whilst taking away with the other, all at a slightly higher price than before. It looks and feels a little less premium than the OnePlus 8 and the OnePlus 8T, but its display is more fluid than the former and its camera is a considerable step up on both. All in all, you’ll struggle to find another £600 phone that provides such an all-round accomplished package.

The OnePlus 9 Pro may be one of the finest and best-equipped phones on the market right now, but if you want to get a true taste of what OnePlus is all about you’ll need to take the OnePlus 9 for a spin.

It’s this £629 phone (£729 for more RAM and double the storage) that stays true to the brand’s heritage of undercutting Samsung and Apple with compelling specifications at a more affordable price tag.

For significantly less money than the Samsung Galaxy S21 (£769) and the iPhone 12 (£799), you’re getting a phone that can stand toe to toe in many respects. 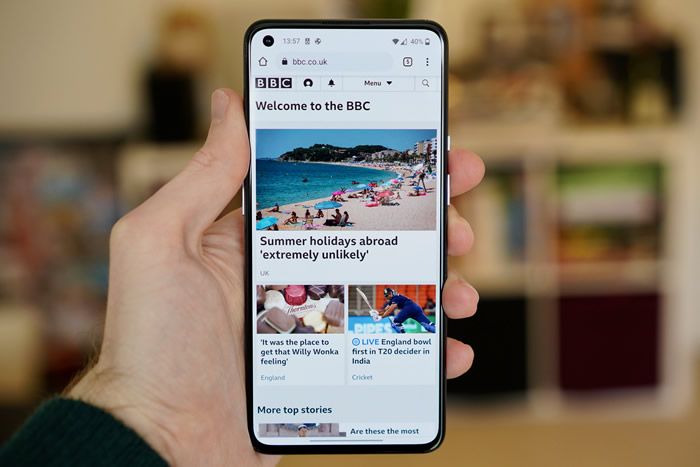 You’re looking at a 6.55-inch AMOLED with a 1080 x 2400 (FHD) resolution, which is the same basic configuration as the OnePlus 8. However, you also get a 120Hz refresh rate, meaning that it updates 50% more frequently.

While the quality of the display remains roughly on a par - similarly punchy colours, deep blacks, and up to 1,110 nits of brightness - scrolling through content is that little bit more fluid than on the OnePlus 8.

If you want a bigger, brighter, sharper display, you’ll need to go with the OnePlus 9 Pro. You don’t seem to get the latter’s elevated 360Hz touch response rate here either. But the OnePlus 9 screen is very competitive at this price. 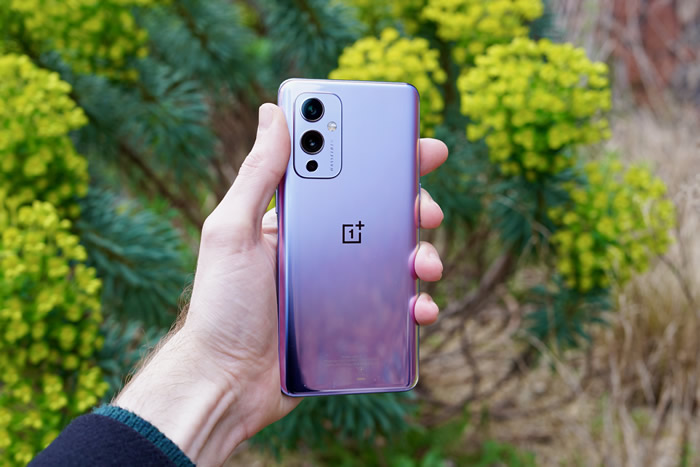 It’s a continuation of the OnePlus 8T’s design language in many ways, with a similarly proportioned and positioned camera module and very similar dimensions of 160 x 74.2 x 8.7mm. This makes it quite a bit wider and thicker than the OnePlus 8, and at 192g it’s 12g heavier too.

Despite bulking up, however, the OnePlus 9 feels a little cheaper. OnePlus has switched from aluminium to a “fiberglass-reinforced polymer frame”, which is a rather highfalutin way of saying plastic. At least it didn’t go for a full-on ‘Glasstic’ rear panel like the Samsung Galaxy S21, though.

It’s actually quite a smart compromise to make when you consider that OnePlus is pursuing improved specs elsewhere while keeping to an aggressive price point. We’d certainly take this over a nicer metal frame and a less capable camera.

Adding to the slight cheapening effect is the fact that the OnePlus 9’s display is dead flat. It’s another shared element with the OnePlus 8T, but the OnePlus 8 display curved away ever so slightly for a more premium effect.

Here’s the first of two major areas where the OnePlus 9 improves upon the OnePlus 8T. Its Snapdragon 888 chip makes it considerably faster than its predecessor, and the phone’s performance is right up there with Android phones that cost double the money.

If we’re being pedantic, it’s not quite as fast as the OnePlus 9 Pro, despite running the exact same chip and the exact same amount of super-fast LPDDR5 RAM (8GB or 12GB). Our benchmarking tests suggest a very slight but consistent edge for the larger phone, possibly due to its superior cooling.

But in practical terms, the OnePlus 9 is extremely capable. You’ll be able to play PUBG Mobile and COD Mobile on maximum graphical settings, and you won’t experience any stutters beyond those caused by the servers.

Talking of gaming, you still get a larger vapour chamber than the OnePlus 8 family for more sustained high performance.

Even if you’re not a gamer, the OnePlus 9 will feel fast and fluid whatever you’re doing. From multitasking to waking from sleep and jumping into the camera app, it all feels snappy.

We’ve said it before and we’ll say it again: we’re into the OnePlus physical alert slider, and we wish more Android manufacturers felt the same. Being able to instantly switch to silent or vibrate is a small but significant quality of life improvement.

OnePlus’s Oxygen OS software is also a uniquely positive feature. It’s one of the slickest and most tasteful treatments of Android 11 on the market, and it runs extremely fluidly on the OnePlus 9’s speedy hardware.

You don’t have to compromise on stereo sound here either, with a pair of speakers flanking the display. There’s also Dolby Atmos support.

This being a 2021 flagship phone, you of course get full 5G network compatibility. Indeed, if you have access to a strong signal (whether 5G or Wi-Fi), you might be surprised by how quickly the OnePlus 9 Pro dispatches app downloads and updates.

It’s pretty normal to find an in-display fingerprint sensor handling biometric authentication by now. All we can really note on this front is that the OnePlus 9 variant grants fast and reliable access to your phone.

The big focus for OnePlus this year seems to be the improvements it’s made with its cameras, which was long the company’s achilles heel. What’s interesting is that those improvements aren’t merely the preserve of the Pro model.

OnePlus has teamed up with Swedish camera great Hassleblad to improve its colour science across the 9 range. And while that partnership doesn’t yet incorporate hardware collaboration, the OnePlus 9 has still taken significant strides forward on that front.

Its main image sensor is the same one that so impressed us in the OnePlus 8 Pro last year: a 48-megapixel Sony IMX689. You get all the benefits of having a large 1/1.43" sensor, which employs pixel binning to create vivid 12MP shots and pronounced depth of field.

A lack of OIS is a bit of regressive move, and it means that Night shots aren’t as good as the very best on the market, but they’re still perfectly serviceable if you can keep sufficiently steady. You also don’t get a dedicated telephoto lens here, so zoomed shots have to crop in, producing less detail. 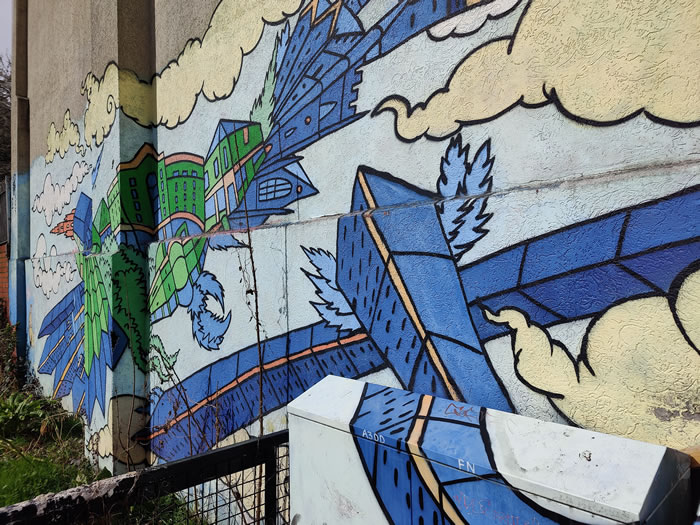 Still, the 50MP ultrawide sensor is the exact same one you’ll find in the OnePlus 9 Pro, complete with a freeform lens that cuts down on visual distortions. You also get the same monochrome sensor that improves any arty black and white shots.

We should note that stepping up to the OnePlus 9 Pro gets you markedly better shots with the main sensor in all lighting conditions. The OnePlus 9 camera system doesn’t trouble the £699 iPhone 12 Mini for all-round image quality either, especially in low light. But make no mistake, this is a good camera system for the price. 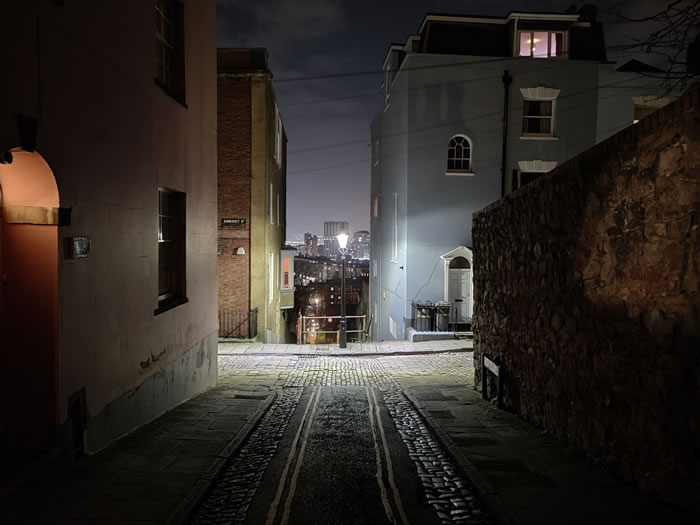 OnePlus has stuck with the OnePlus 8T’s 4500mAh battery for the OnePlus 9, which is bigger than the 4300mAh unit of the OnePlus 8. It’s not a massive increase, but it’s welcome given the presence of a higher refresh rate display.

As a result, you can expect very similar stamina from the OnePlus 9. We were routinely getting through a day of moderate usage with 30 to 40 percent of a full charge left.

Lighter usage - two and a half hours of screen time with near permanent connection to a strong Wi-Fi connection - may see you able to go through two full days of usage. But generally speaking, this is a comfortable one-dayer.

Recharging speed was a big feature of the OnePlus 8T, and it’s equally impressive here. With support for 65W fast charging, which extends to including the necessary Warp Charge power brick in the box (hear that Samsung and Apple?), you can go from 1 to 100% in 29 minutes.

Elsewhere, there’s ample storage with a choice of 128GB or 256GB, though you won’t be able to supplement that with microSD expansion.

5G connectivity comes as standard, which is something we expect of all but the very cheapest phones in 2021. It’s become a reassuringly regular feature.

The OnePlus 9 offers a lot of phone for the money. It might be a touch more expensive than its predecessors, but it still costs a lot less than the Samsung Galaxy S21 and the iPhone 12.

And it’s those kinds of phones with which the OnePlus 9 deserves to be compared. Its design is a bit of a backwards step, but in terms of performance, camera capabilities, display quality and feature list, it’s there or thereabouts.

True, it’s not the absolute best in any one category, but the OnePlus 9 stays true to its heritage by giving you a flagship-like experience without breaking the bank.