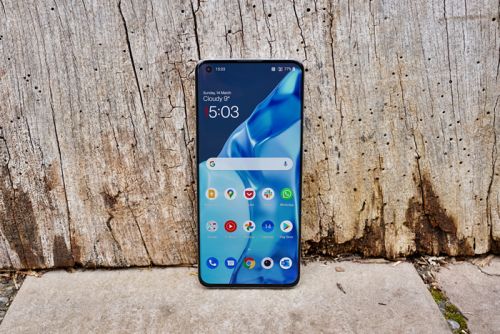 With a fantastically vibrant and fluid display and an equally technicolour camera, the OnePlus 9 Pro scores good or great marks in all of the areas that matter. It’s a strong performer, neatly (if boringly) built, and OxygenOS is one of the finest UIs in the business. All in all, the OnePlus 9 Pro is one of the best all-round flagship phones on the market.

Ever since the arrival of its first phone in 2014, OnePlus has been a disruptive force within the smartphone industry. Operating under a credo of ‘Never Settle’, this unorthodox brand made a name for itself by providing pseudo-flagship devices for half the price.

Even so, it wasn’t until last year’s OnePlus 8 Pro that the brand succeeded in producing a phone capable of mixing it with Samsung’s and Huawei’s finest. Now the OnePlus 9 Pro is here to continue along that path. 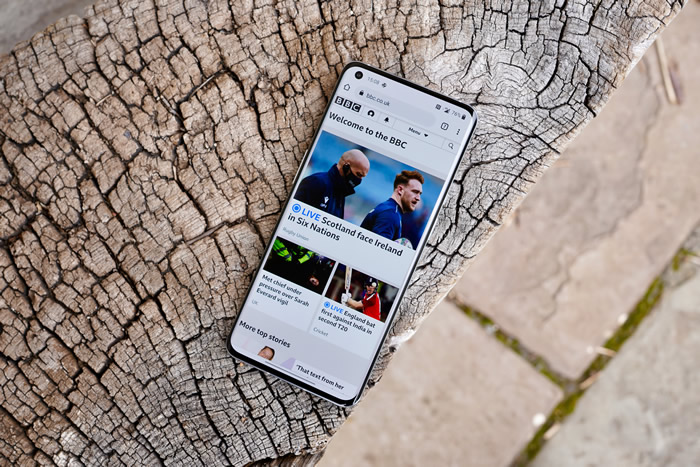 The major improvement over its predecessor comes with the implementation of LTPO technology, which essentially enables that refresh rate to drop to single digits when the situation calls for it. You don’t need full 120Hz when you’re looking at a photo or reading static text, so LTPO helps the phone to conserve energy.

Touch responsiveness has been increase to 360Hz, which is up from 240Hz in the OnePlus 8 Pro. To be perfectly honest, the vast majority of users won’t notice this increase, but if you’re a serious gamer you’ll take every edge you can get.

It’s also simply a beautiful display, to the point where it’s earned a nigh-on perfect DisplayMate A+ rating. Colours look natural, dynamic range is on point, and it gets plenty bright to the tune of 1300 nits. It’s quite simply one of the best displays to be found in a phone in 2021.

OnePlus hasn’t completely ditched the curved edges, as it did with the OnePlus 8T towards the end of last year. But the gradient is noticeably flatter than the OnePlus 8 Pro, leading to fewer false presses with your holding hand. The visual effect is less distracting with full-screen video or gaming content, too. 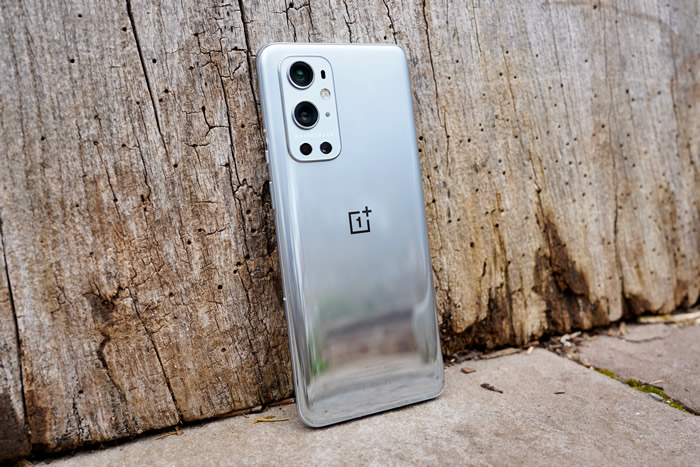 OnePlus has never made the most visually distinctive phones, but they always feel great to use. The company calls this functional approach ‘Burdenless’, which is a pretty apt description of the OnePlus 9 Pro.

From its gently rounded aluminium frame to its curved glass front and rear panels, the OnePlus 9 Pro meets the required premium feel we all expect of our flagship phones. But it’s certainly not as visually arresting as the Samsung Galaxy S21 range, nor as trend-bucking as the squared-off iPhone 12.

Our test model comes in Morning Mist, which has a half reflective, half diffused silver finish rather like the effect of breathing on a mirror. You can also get the phone in Pine Green and Stellar Black, which are both matte. We haven’t seen or held those other colour variants, but we imagine they’re less prone to attracting greasy fingerprints than our Morning Mist model.

The phone is fraction shorter, narrower and lighter than the OnePlus 8 Pro, but ever so slightly thicker. Around back a repositioned camera module feels better integrated than its predecessor, and it doesn’t snag on pockets half as much. Meanwhile, an IP68 rating ensures a high degree of water and dust resistance.

One area that OnePlus is always loathe to compromise on is performance. And with a Snapdragon 888 CPU at its heart, the OnePlus 9 Pro isn’t about to buck that trend.

This is the go-to high-end processor for early 2021 Android phones. You’ll find it elsewhere in the Xiaomi Mi 11 and certain regional variants of the Samsung Galaxy S21, which are two of the fastest phones on the market.

Sure enough, the OnePlus 9 Pro flies. Ably backed by either 8 or 12 GB of super-fast LPDDR5 RAM, and with an enhanced ‘Cool Play’ vapour chamber, the phone can run PUBG Mobile and Call of Duty Mobile on absolute maximum settings without heating up.

Indeed, OnePlus is making quite a play for the gaming crowd with the 9 Pro. Those aforementioned competitive online games (OnePlus also cites League of Legends and Brawl Stars in its blurb) can take advantage of the phone’s enhanced 360Hz touch response rate, which we mentioned above. 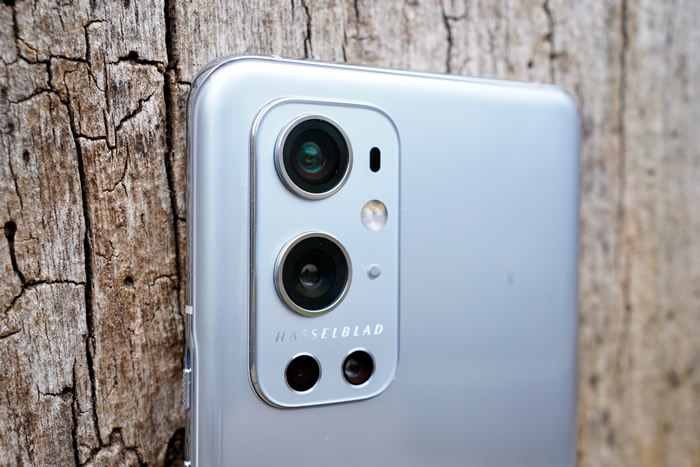 The main reason the OnePlus 8 Pro was able to break the company’s ‘true flagship’ duck was down to the camera. It was the first genuinely good camera system the company had ever produced.

Now the OnePlus 9 Pro has added a second, and it’s roped camera specialist Hasselblad in to help. In future, this partnership will work its way into the camera hardware side, but for now the legendary Swedish company has cast its critical eye over OnePlus’s colour science and camera calibration.

Hassleblad’s tinkering yields shots that, for the most part, pop with warm, vibrant colour without looking garish or overly artificial. It’s not as consistent as the very best cameras on the market from Apple and Samsung, but it’s capable of great things.

You also get a Hassleblad-orange shutter button, the brand’s distinctive shutter sound, and a very tidy Pro mode UI.

The same shots taken with both phones show the OnePlus 9 Pro to shoot brighter, punchier snaps in general, with superior dynamic range. Occasionally you might pick out more noise in certain background elements (blue skies for example), or some overexposed areas. But the payoff for this seems to be generally richer colours and superior detail. In some urban shots, whole areas of brickwork appeared on background buildings where they were smudged out of existence on the OnePlus 9. 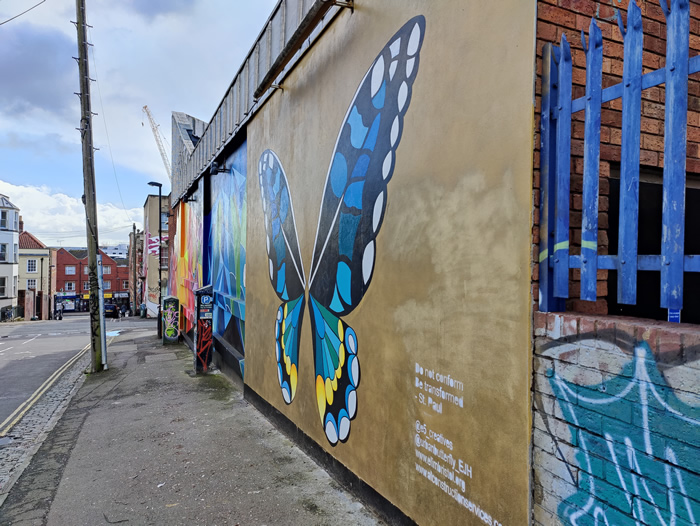 This like-for-like comparison also shows how much better the OnePlus 9 Pro’s Nightscape mode is than before. Night time shots are noticeably clearer and brighter than on the OnePlus 9, doubtless helped by the presence of OIS, with a lot more detail pulled out of the shadows. 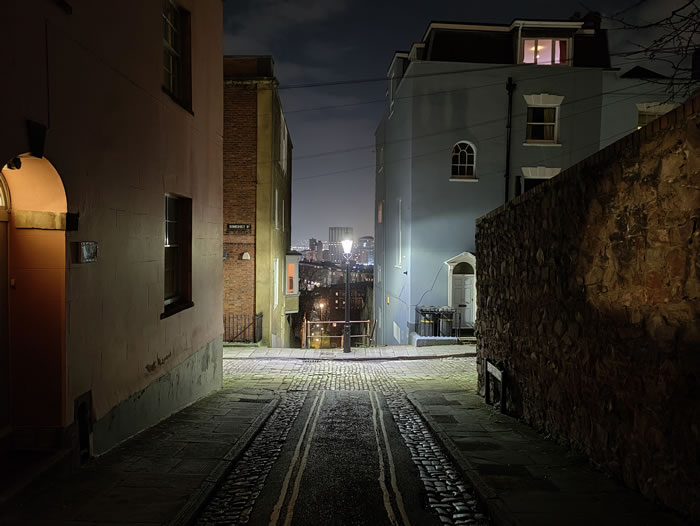 In addition to that bold new main sensor, you get a strong 50MP ultrawide with a freeform lens, which cuts down on telltale visual distortions. There’s also a competent 8MP 3.3x telephoto lens for zoomed shots, and a rather niche monochrome sensor for enhance black and white snaps.

The UI is generally slick and approachable, though we found that phone would jarringly crop out to the ultrawide for ‘Super macro’ shots when you get close up to a subject, even when the focus appears to be on point with the main sensor.

It doesn’t quite mix it with the very best - a firmware update or two could help with that - but this is still a very accomplished camera system.

The OnePlus 9 Pro isn’t lacking when it comes to flagship features. Some of these are a case of reassuring box-ticking, while others stand as unique identifiers.

On the latter front, we’re big fans of the signature OnePlus physical alert slider on the right hand edge of the phone, which lets you flick between silent, loud, and vibration alert states. Aside from Apple, no other manufacturer seems to implement such a thing on a regular basis.

Another unique feature is OnePlus’s Oxygen OS software, which is built on Android 11, like practically all of its 2021 rivals. OnePlus’s custom UI seems crisper, less cluttered, and more fluid than most others, without sacrificing on customisation potential. It handles brilliantly on the OnePlus 9 Pro’s impeccable hardware, with nary a hint of stutter or slowdown.

Less unique but still noteworthy, the OnePlus 9 Pro packs a decent set of stereo speaker with Dolby Atmos support. We also appreciated the quality of the haptic motor, which gives nicely nuanced tactile feedback to your taps and notifications.

Also worthy of mention is the in-display fingerprint sensor, which is just about as quick and reliable as they come.

OnePlus hasn’t increased the size of the battery from the OnePlus 8 Pro at 4500 mAh. But with a variable refresh rate display and a more efficient processor, it should last you a tad longer between charges.

Only a little longer, mind. A day of fairly moderate usage - 15 hours unplugged with 4 hours of screen on time, much of it spent on a stable Wi-Fi connection - will leave the phone with a little over 35% left in the tank. Streaming an hour of video on Disney+ or Amazon Prime, with the screen brightness cranked up to full, will drain around 10% of a charge. Sustained heavy usage might just leave you looking to power saving modes before bed time, or even a quick top-up.

Thankfully, the OnePlus 9 Pro’s idea of a quick top up is very impressive indeed, with the capacity to go from 1 to 100% in just 29 minutes. The phone comes with a 65W Warp Charge power adaptor in the box, which trumps Samsung and Apple on value as well as speed.

What’s more, support for 50W wireless charging means that the OnePlus 9 Pro charges faster wirelessly than the Samsung Galaxy S21 and iPhone 12 do through their fastest wired connection. You will need to buy the company’s special Warp Charge 50 stand to benefit from this, however, which well set you back a full £70.

This being a 2021 flagship phone, you of course get full 5G network compatibility. Indeed, if you have access to a strong signal (whether 5G or Wi-Fi), you might be surprised by how quickly the OnePlus 9 Pro dispatches app downloads and updates.

The OnePlus 9 Pro is another fine flagship phone from OnePlus. It won’t be giving Samsung’s or Apple’s design teams any sleepless nights, but the phone’s QHD 120Hz display is superb, performance is on point, and its new Hasselblad-enhanced camera system can take vibrant shots in all conditions.

Elsewhere, OxygenOS continues to impress with its clean, fluid layout. The OnePlus 9 Pro’s battery life is decent, and topping up that battery is a ridiculously swift process whether wired or wireless.