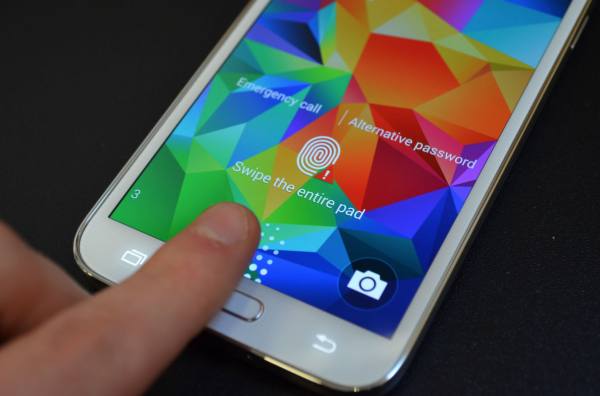 "The Galaxy S5 appears to be Samsung's best smartphone so far. There are some negative points but it is still the best handset Samsung has ever produced." 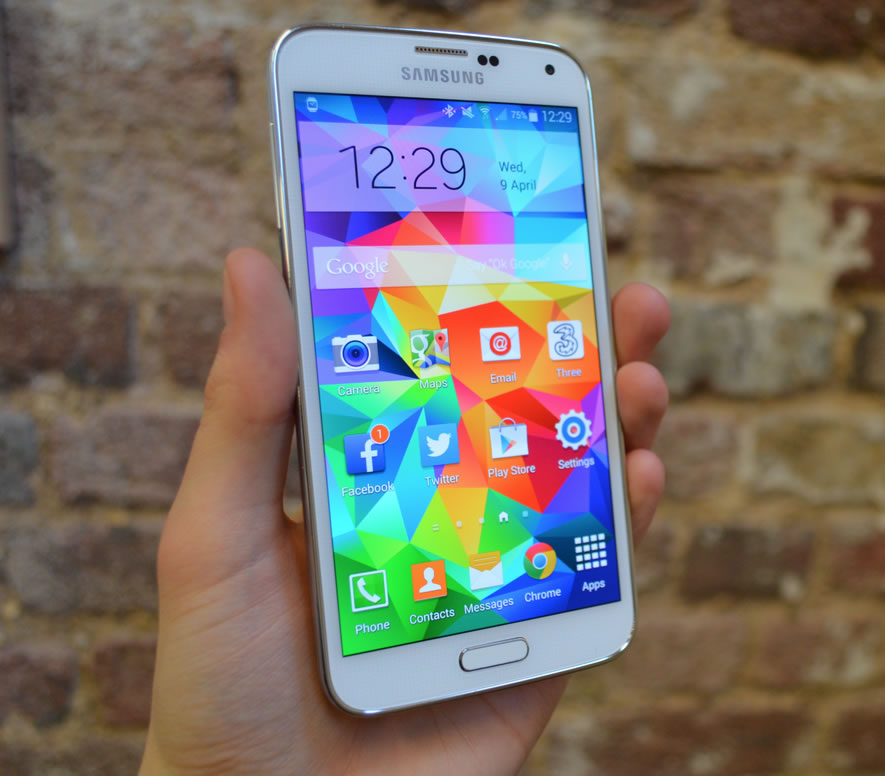 Like many phones we review, the Samsung Galaxy S5 doesn’t represent a great revolution in technology – but instead an improvement on an old classic. That’s not to say it’s a bad thing – after all the Galaxy S range is rather like the Porsche 911 of the smartphone world, as it comes back with small upgrades rather than an entire transformation - and anyway who would want to mess too much with something that is so successful?

Other phone manufacturers do the same thing of course – just take a look at HTC, Sony and Apple. Mind you, the iPhone is six months out of synch with the market, while HTC has not really done much more than add a bit of polish to the new One – the M8. 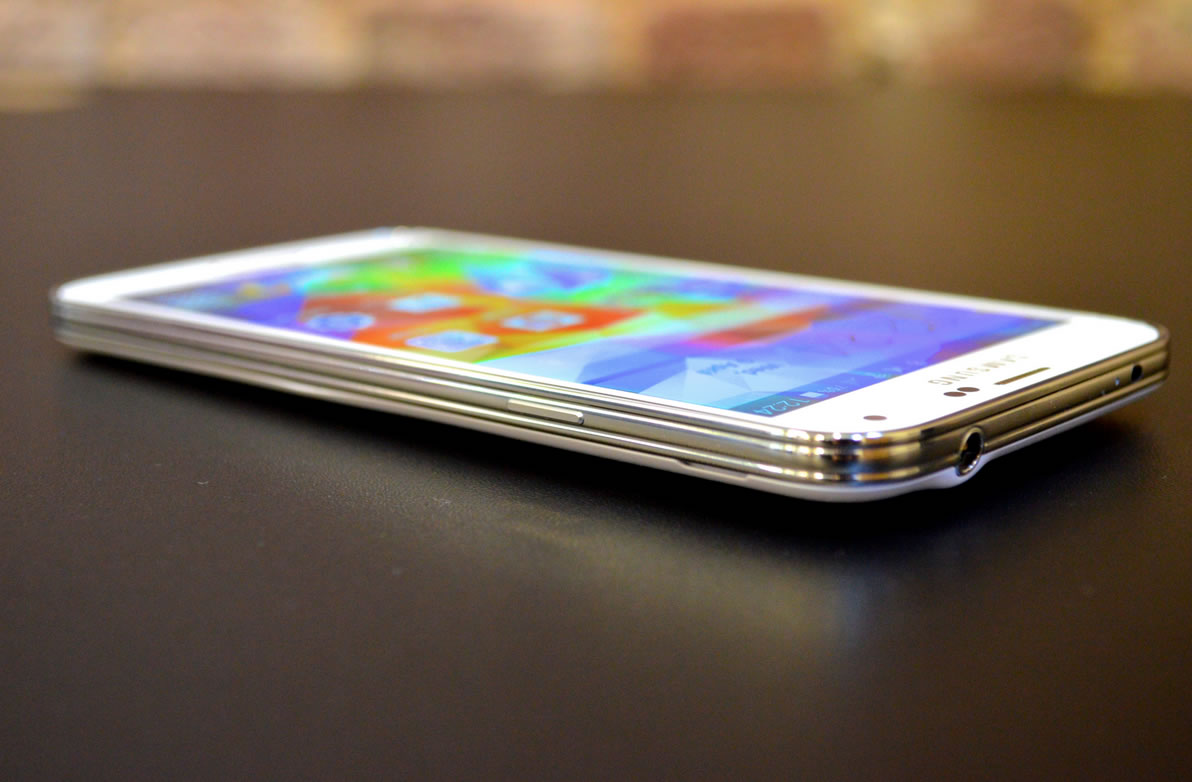 The Samsung Galaxy S5 has an impressive spec sheet, including 2GB RAM, a 2.5Ghz quad-core chip, Full HD display, a fingerprint reader, a 16-megapixel snapper and a heart-rate monitor. Looking at it on paper, it appears that Samsung has the clout to stand up against HTC, Sony and Apple. But is that enough – has Samsung played too safe with this new release?

In the past few months we’ve been spoiled with some beautiful phones from Sony, HTC and Apple that also cut the mustard with their power and brains. The likes of the HTC One (M8) earned full marks from us for design, even though it didn’t have the best snapper – but the high-quality feel and design is something that the S5 can’t quite live up to.

It isn’t the be-all and end-all, but we have to admit to being a tad disappointed when we picked up the handset for the first time. It’s light and slim, weighing 145g and measuring 142 x 72.5 x 8.1 mm, but the dimpled back and the chrome-covered plastic bezel don’t scream ‘quality’ – a bit of an issue when you’re paying out £500-600. 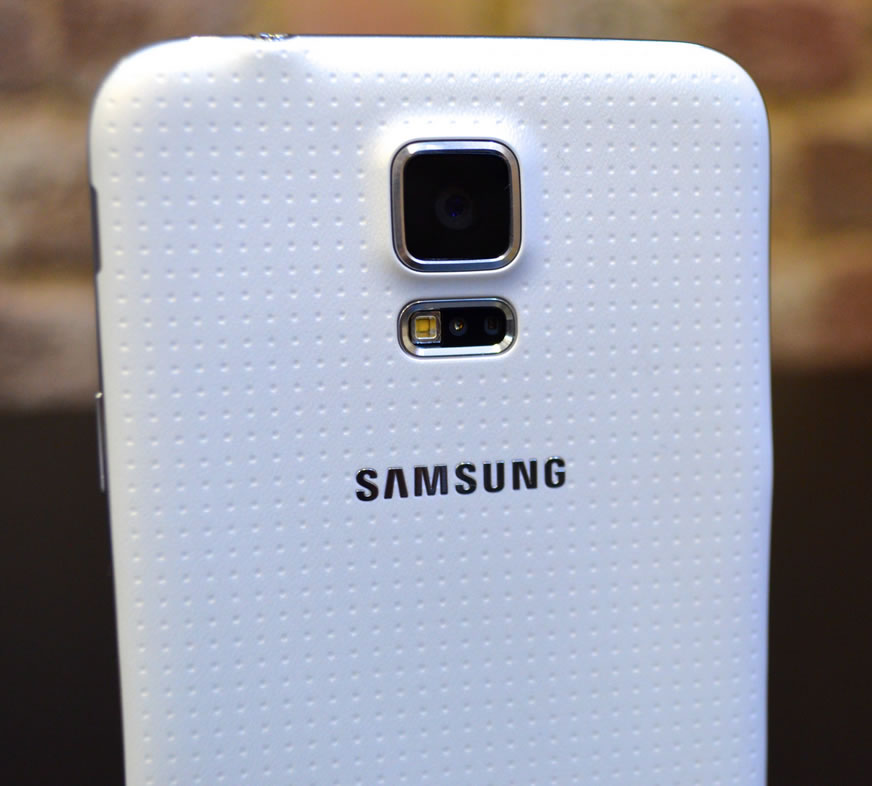 To be fair, if you’re already a Samsung fan, you’ll probably love the Galaxy S5 – if you had the Galaxy S3 and S4, there’s no reason why you won’t upgrade to the S5.

If you ignore the design, though, the S5 offers everything you might expect from a flagship device – and plenty more besides that. The power button sits on the left, while the volume rocker is on the right. The waterproof jack sits on top, by the infrared control. The headphone jack is both dust and water resistant, but the HDMI and micro USB ports have to sit under a plastic flap. It’s not unusual – the Sony Xperia Z2 has the same issue. Okay so it will be a boon if you drop your handset in a puddle, but having to prise open the flap each time you charge is rather annoying.

Samsung promised a ‘glam’ design and the blue and gold versions of the phone live up to this – especially when their metallic finish catches the light. Not everyone will like them, but it does mean the S5 stands out from the monotone alternative. We have to say the golden editions of the iPhone 5 and HTC One look understated in comparison.

If you want something less flashy, there are white and black models – our ‘shimmery white’ model had an almost matte-appearance, except for a chrome edge. Although we have to say that the chrome ring surrounding the heart rate monitor and rear snapper offer a feel of quality that is not echoed elsewhere.

The S5 is only a tad bigger than the S4 and looks pretty similar. New additions are the fingerprint scanner, which is combined with the Home key, and the heart rate monitor, which sits beneath the rear snapper. Using the S-Health app, the heart rate monitor measures your pulse from your index finger – it seems to work fine, but why you would need this facility on a phone is beyond us – it makes sense on Samsung’s Gear 2 smartwatch, which you would probably wear when running or at the gym

However, the fingerprint scanner works perfectly – you can save as many as three fingerprints on one phone – simply swipe across the Home key to unlock the device. If you have small hands, you may find it a little tricky to swipe at the right angle if you’re using the device with one hand.

From a security point of view it’s a neat feature – it’s all too easy to see someone’s PIN if you’re sat next to them on a train – but it’s not easy to copy a fingerprint! Unlike Apple, Samsung has allowed developers to use the facility in apps – so now you can use Paypal by using your digit. We hope to see more ways to pay bills and so on on your mobile without a password in the near future.

The screen on the S5 is really big – it measures up at 5.1ins and also benefits from Full HD resolution - 1920 x 1080. It’s nothing sort of gorgeous, with great viewing angles, and really thin bezels. The depth between display and glass is shallow, which means it feels like you’re dipping your digit into the screen at times. The screen has the edge over the HTC One (M8) – it’s the best we’ve seen on a smartphone – ever.

We’ve had reason to moan about Samsung cramming its phones with gimmicky software in the past – for instance the Touchwiz UI on the S4 was impressive with all its photo features and gestures but the novelty didn’t last long out of the shop. The good news is that the S5 has gone right back to basics. It still features Air View, which lets you use the screen simply by hovering a finger over it, and it is possible to wave at the display to navigate menus, but mostly these are switched off in default mode. 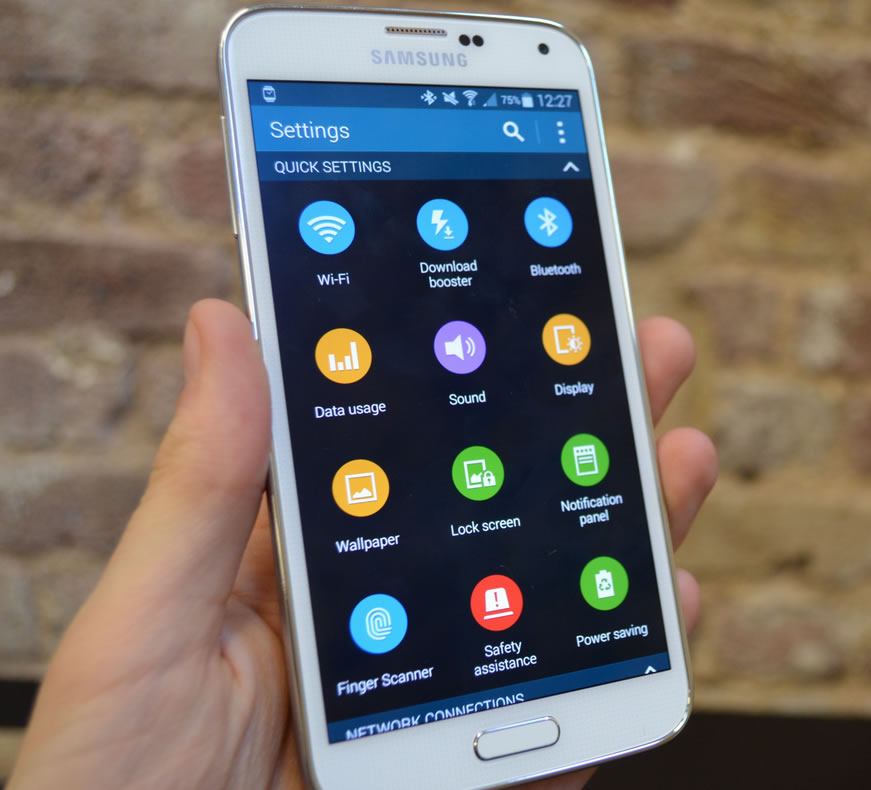 The Settings list, which was rather lengthy and complicated, has been given a fresh new look with icons arranged in a simple grid format, which make sit more user friendly. Things like the settings drawer and pull-down notifications have also had the simple treatment.  Apart from that, it all looks pretty familiar for users of previous Galaxy phones.

Under the hood sits a 2.5GHz, quad-core chip accompanied by 2GB of RAM. This is one speedy device – apart from the Gallery app for some reason, which every so often decided to be rather sluggish when opening.

Connection-wise, the phone is compatible with 4G and we found that it worked beautifully in south-west and central London. 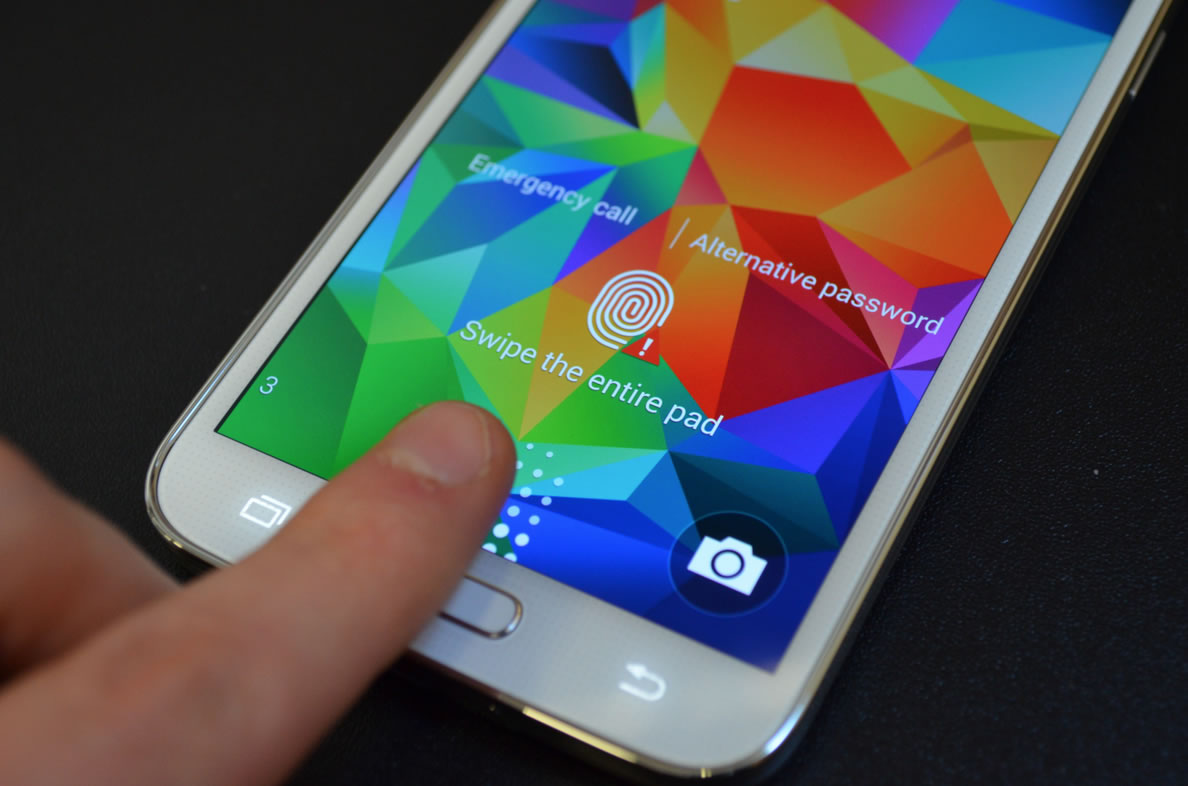 We’re glad to see that smartphone makers are focusing on battery life this year – if you’ve headed off for the weekend without your charger, the Ultra Power Saving mode will be a godsend. It means the screen only shows black and white and you can only access apps such as texts and phone, while Bluetooth is switched off.

It makes a massive difference – with 42 per cent of charge left, the mode reckons the phone should last for more than five days on standby. Samsung says you can get a day’s life out of the last 10 percent of battery charge.

The snapper on the S5 has a slightly higher pixel count, with the megapixel count increasing to 16. But there’s much more – it has 24 settings, including image stabilisation, ISO adjustments, timer, exposure, flash and so on.

Some of the most notable inclusions include Live HDR, which allows the user to see what High Dynamic Range photos will look like before they are taken. Selective Focus, meanwhile, adds a blurred background to your snaps, creating a shallow depth of field rather like the depth sensor on the HTC One (M8) 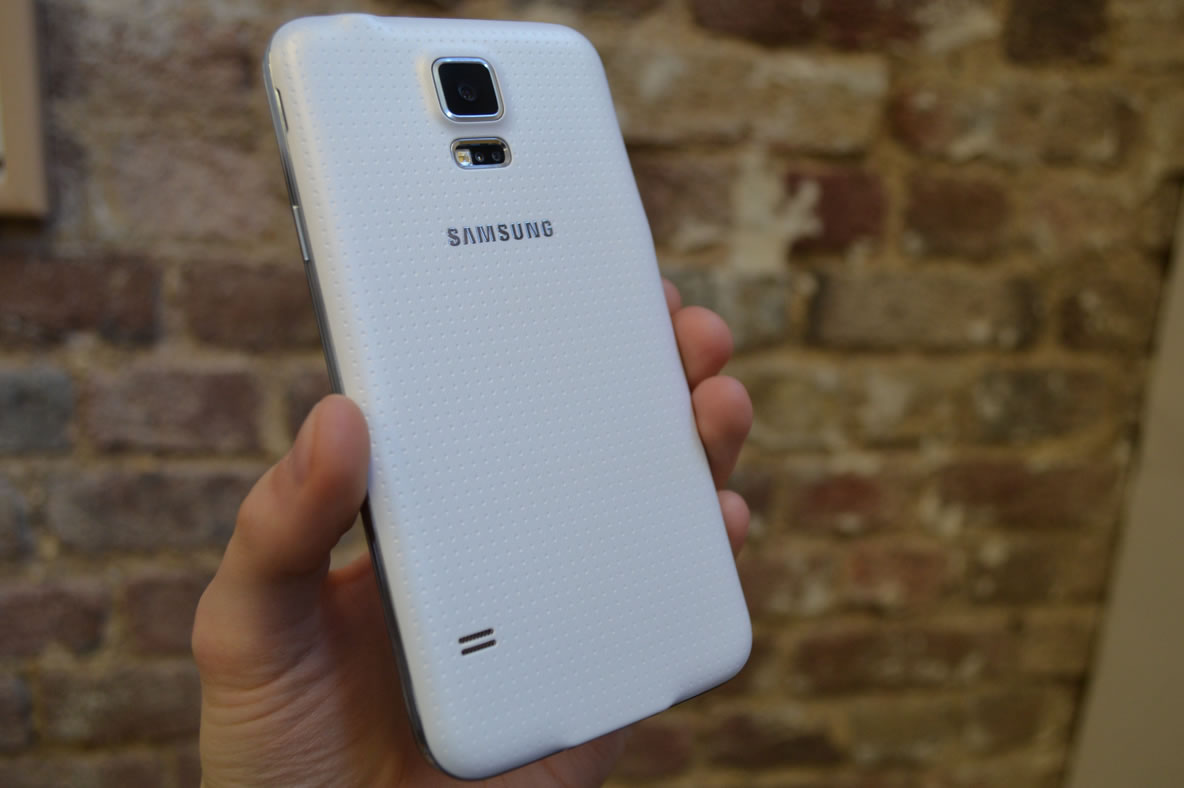 You can choose from five shooting modes – our favourite is ‘Virtual tour’, which produces a Google StreetView-style image that you can find your way around. You could even shoot a tour of your house if you are selling online.

According to Samsung, the S5 is able to adjust exposure and be snap ready in only in 0.3 seconds. We reckon this is about right - but it’s a shame there’s no dedicated shutter key – it can be hard to tap the screen to focus an image if you’re holding the device in one hand.

Photos are excellent – bright and crisp with strong, but natural colours. Okay it’s not quite up there with the Lumia PureView lenses from Nokia but it’s still impressive.

Ultra HD 4K video is shot at a resolution of 3840 x 2160 and though this looks impressive on paper, we won’t really see the benefits of this for some time as Ultra HD computer screens and TVs are too pricey for most consumers at the moment and by the time they come down in price, buyers of the S5 will be changing their phones.

The Galaxy S5 appears to be Samsung's best smartphone so far. There are some negative points but it is still the best handset Samsung has ever produced. Like other classics, the Galaxy gets better with each generation, without deviating far from the original. The Galaxy S5 has been improved and refined, and if you like Samsung devices then there is no doubt you’ll like it. But there are some good alternatives.