Wireless charging: Everything you need to know 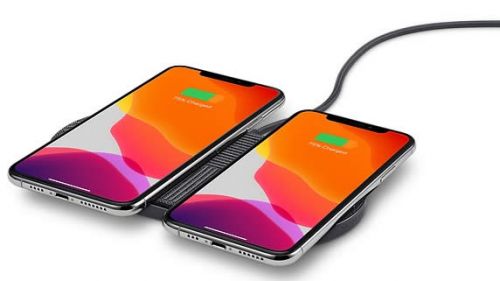 You’ve probably heard of wireless charging even if you’ve never actually used it, but its availability and popularity is only going to grow, so it’s worth learning about it now.

Whether you’re not sure what it is, why you should want it, or what devices support it, we’ve got the answers.

What is wireless charging?

Wireless charging is basically exactly what it sounds, the ability to charge a device wirelessly, though it’s not always quite as simple as that, as it typically requires a wireless charging mat of some kind which itself will usually have a wire.

So essentially in most cases you would place a phone (or other device that you want to charge) on a charging mat, and just by being placed there it would be charged up. So there’s no wire required into the phone, but there is usually one into the mat.

What different types of wireless charging are there?

There are two main types of wireless charging: inductive and conductive. Inductive charging allows energy to be transferred across a gap using an electromagnetic field, meaning that the charging source doesn’t require direct contact with your device’s battery.

Conductive charging meanwhile does require direct contact between the power source and the battery. As such it’s a bit more like wired charging and a bit less versatile, but there’s also less wasted energy. Both versions of wireless charging are used but inductive charging is currently more heavily supported.

In fact there are two main wireless power organisations - the Wireless Power Consortium (WPC) which uses the popular Qi standard, and the AirFuel Alliance, both of which use inductive charging.

Within inductive charging though there are different technologies. The AirFuel Alliance for example focuses on magnetic resonance coupling and radio frequency (RF) tech, which among other things can allow for more spatial freedom, with RF offering charging ranges of up to 15 feet.

Qi meanwhile works over a much shorter range (of up to 40mm), but is commonly used for smartphones, including those of Apple, Samsung, and others.

What’s so good about it?

Wireless power aims to free you from wires. Although a charging mat is still generally required it can be more convenient, as you don’t have to plug your phone in, you just place it on the mat and in some cases multiple devices can be charged at once by a single mat.

To make it even more convenient some manufacturers are starting to build wireless chargers right into things, such as car dashboards and tables.

As well as being a little more convenient than wired charging, wireless chargers are also more durable, as they don’t get worn out in the way wired ones do from constantly plugging them in and unplugging them. Similarly, you don’t risk damaging the charging port on your phone when you juice up wirelessly.

How fast is wireless charging?

Speed is one of the main downsides of wireless charging, as it’s not as fast as the fastest wired solutions. However it can still be very fast, with the latest Qi standard at the time of writing supporting wireless charging speeds of up to 30W.

While some phones offer more than twice that with wires, most don’t. In fact, the Samsung Galaxy S20 for example only offers 25W wired charging power, despite being a flagship. You can expect the tech and the speeds of wireless charging to improve over time too.

Are there any other downsides?

Wireless charging can also be less energy efficient, with some energy lost during transfer and by extension it could be slightly more expensive, but these things too are being improved.

Another potential downside is that there are multiple wireless charging standards, so one charger may not work with all devices, however in practice almost all smartphones use the Qi standard, so it’s not such an issue.

Plus, the need for a device to sit on a charging mat while charging makes it more awkward to use – with wires you can pick your phone up and continue using it, but with a Qi charger, picking the phone up will stop it charging.

What phones support it?

Basically, most (but not all) remotely recent flagships support it, as do a number of lower end handsets.

Then there are various other – mostly much older phones - which can be wirelessly charged with the help of a wireless charging case.

More and more new devices are sure to support wireless charging too, as the tech is becoming ever more common and increasingly expected in phones.

Note that some phones also now act as a wireless charging pad for other devices, through something called ‘reverse wireless charging’ or similar. This means you can place, say, a smartwatch or another phone on the back of one of these, and charge it back up wirelessly – draining battery from the phone acting as the charger to do so. This form of wireless charging can also be truly wireless.

Do other devices support wireless charging?

Yes. Anything that requires charging could theoretically be made to support wireless charging, including tablets and smartwatches, and some of them already do. Over time we’d expect to see ever more devices of all kinds support it.

How do I charge my device wirelessly?

If it supports wireless charging then all you need is a wireless charger. It may well have come with one, but if not you can buy one and they start at around £10.

Do any shops or businesses have wireless charging infrastructure?

Yes. In the UK, some McDonald’s restaurants have wireless chargers, as do some Starbucks branches, and Heathrow Airport, among other places. In the future you’re likely to see more restaurants and coffee shops as well as hotels, airports and anywhere else you might want to charge your phone having wireless charging infrastructure.

How will wireless charging develop?

Wireless charging is good now, but there’s the potential for it to be so much better. For one thing a growing number of appliances and pieces of furniture now have wireless chargers built in. One day this could be commonplace, theoretically allowing you to charge your phone by placing it on almost any surface.

The fact that there can be a gap between the charger and the battery also means that chargers can potentially be disguised, so they don’t ruin the appearance of the things they’re built into.

Rezence from A4WP for is already experimenting with longer ranges, so that wireless charging can work through clothes and even books for example.

It’s even theoretically possible that wireless charging could be made to work over great distances, so you won’t need to put your phone down at all. Instead imagine a charger in your home sending out energy which your phone can receive anywhere, keeping it charged at all times.

However this is likely to remain a hugely inefficient way of charging, so having a shorter distance between the device and the power source is always likely to be preferable.